To whom much is given

For the past 25 years, my professional journey has been shaped by a legacy of service that began with City Year and AmeriCorps. As part of the first class of AmeriCorps members to serve with City Year in 1994-1995, I have had the privilege of witnessing the formation and contributing to the evolution of a BIG IDEA, the idea of national service as a pathway for collective action that makes a difference in the lives of others.

When I was 4 years old, my family immigrated from India to America. My parent’s decision to raise me in the United States meant that I was granted opportunities that countless youth in our village did not have access to. At an early age, I developed a sense of responsibility that compelled me to give back.

It is often said that “to whom much is given, much is required.” My professional journey began as an idealistic young person, hungry for the opportunity to serve. In college, I explored volunteer work in schools, teaching and mentoring students toward greater academic success.

After completing my undergraduate degree at Harvard University, I knew that I needed time to assess my career goals and decided to spend that time further exploring service work.

I joined City Year and proudly served students at the Manning Elementary School in the Jamaica Plain neighborhood of Boston. City Year, already 5 years old, had just become part of the AmeriCorps family of programs. The union of these two altruistic missions had elevated the profile of national service and built a solid foundation for a transformative experience, serving students in systemically under-resourced schools. The work I did as an AmeriCorps member captured my idealistic spirit and put it to use; it rooted my professional career path in a deep ethic of service.  I fell in love with this big idea and have never looked back.

Even in the earliest days of AmeriCorps, I could already see how much fuel for national service the program would be. After my service year at Manning Elementary School, I joined City Year Headquarters as a communications manager for two additional years, further deepening my commitment to service and exploring the unique organizational momentum built by AmeriCorps.

When I left City Year to pursue a master’s in business administration and explore the private sector, I took that inspiration with me. It guided me through the many challenges and opportunities I encountered during 15 years of work in finance, first with Goldman Sachs in the US and the UK and then later, with Barclays. Both Goldman and Barclays gave me the latitude to do volunteer work and I was able to build a bridge between my belief in the power of service and my skills for bringing to bear the resources to help fund that service.

A life-long commitment to service

I went from being an AmeriCorps member on the front lines, to working on the City Year communications team, to partnering with City Year in new ways. First, I helped City Year launch an international affiliate in the UK by serving as a founding board member and an individual donor, and then continued my commitment to City Year as a corporate sponsor with Goldman Sachs.

In sharing my personal story with colleagues at Goldman Sachs, I witnessed a ripple effect across the company that inspired the building of a team of individual donors. I asked my teammates if they would consider mentoring City Year members. Several of my colleagues immediately signed up as mentors and I was able to help connect people to strengthen the mission not just with financial contributions, but also with support from individuals who gave of their time, talents and efforts. 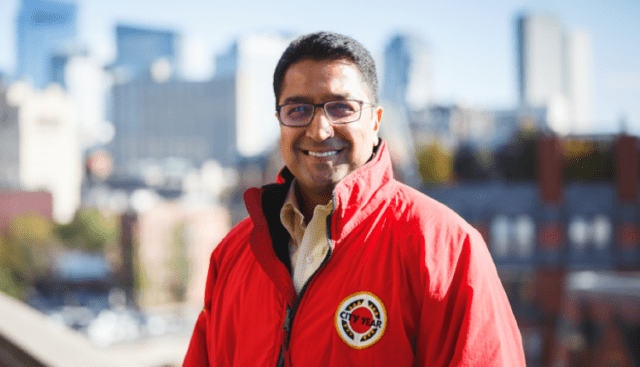 Through these experiences, it became clear that the big idea of national service was beneficial to all, regardless of where they came from. There was and still is a strong belief that young people should be given the opportunity to explore national service and that those who can should help support the existence and further cultivation of such pathways.

My work as a banker did not take me away from my commitment to service. In fact, witnessing the transformation that service made in my colleagues in the field of finance reinvigorated my passion for service work. I knew, beyond a doubt, that this was a lifelong journey for me. I doubled down on my commitment to City Year and found my way back to the nonprofit world to continue the work of empowering collaborations that help deepen the impact of national service–specifically by supporting the growth and development of both students and our remarkable AmeriCorps members.

“I envision a time when service work is the norm in our country, a common pathway for contributing to society, elevating others and becoming well-rounded citizens with a shared commitment to service. I envision young people, upon graduating high school or college, having national service as an ordinary, voluntary next step in a life defined by the ethos of work rooted in service.”

The beauty of AmeriCorps

What makes AmeriCorps so unique is that it was designed not to merely support a few community programs, but to fund national service initiatives large and small, across the country. The goal of AmeriCorps has always been to elevate the status of national service and promote the idea that service to others in need is a wise investment that is worthy of our collective engagement.

The aim of AmeriCorps has never been about narrowly defining what national service is or about dictating where or how it should happen; instead, the organization was designed to serve more like a fertile garden that allows a thousand different service flowers to flourish.

The brilliance behind AmeriCorps has been that every program that comes forth from its funding structure bears the potential to further seed the idea of national service as vital to civic life. It has never been about a specific type of program or working in a specific area, but rather about the proliferation of an idea with the power to transform the health and wellness of our country.

That is the beauty of AmeriCorps. That is what makes the past 25 years a testament to our country’s resilience and innovative spirit.

Service to a cause greater than self

Even now, decades later, I am still stirred by the thought of what I have gained from my service year.

One of the biggest benefits of serving in an AmeriCorps program is the learning and growth that happens in connecting with a diverse group of people united in common purpose. It was inspiring to witness that from difference we could and did derive commonality. What we held in common was our belief in service to a cause greater than self. That belief continues, through time, to unite us in a powerful way.

As young people, we worked across difference to help ensure that kids, regardless of the zip code they were growing up in, would have opportunities to access a good education and achieve their goals. Our daily work was incredibly fulfilling. It made getting up early and going home late, working long, hard hours that were barely compensated by a small stipend, entirely worthwhile.

None of us were doing a City Year for the money. We all deeply understood the value of what we were aiming toward. The experience of working hard to create more equity for students navigating the challenges of having to learn in struggling schools, gave added meaning to the Segal Education Award we received at the end of our service. Most importantly however, it was the work itself, not the rewards, that made us all believe in the mission.

A bright future for national service

My hope for the future of AmeriCorps centers on the continued proliferation of the seeds of national service as a big idea that can inspire and improve our country. It is about continuing to help those seeds come to fruition within our shared culture as Americans. I envision a time when service work is the norm in our country, a common pathway for contributing to society, elevating others and becoming well-rounded citizens with a shared commitment to service. I envision young people, upon graduating high school or college, having national service as an ordinary, voluntary next step in a life defined by the ethos of work rooted in service. Through AmeriCorps, young people across the nation will be able to take their learning journeys further than they have ever imagined. What begins with an idealistic dream of making a difference, will, through the continued cultivation of these national service pathways, become the fulfillment of the promise of our nation’s greatest ideals.

May the next 25 years of this shared journey in service to others bring forth greater opportunity for all.

Join us in celebrating the 25th Anniversary of AmeriCorps!  Share your fondest memories of service using the hashtag #AmeriCorps25.

#cyhead2toe: Alums reflect on a decade of service

we invited several members of our 32,000+ alumni community to share short uniform stories that explore the power and potential...

Ben came to his service with a passion for engineering. Read more to see how he shared this with his...

4 tips to help your mid-year move

Congratulations on starting your City Year journey! As a mid-year AmeriCorps member who begins service in the middle of the...

5 ways to describe your City Year journey to your family

Your City Year service journey can be hard to describe. Check out these tips for describing your service to friends...