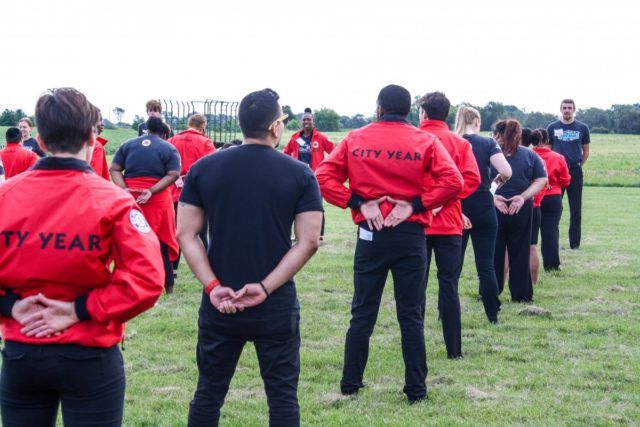 It was the morning of Wednesday, August 14 when the City Year Milwaukee corps boarded three buses and rode to Inspiration Ministries in the beautiful town of Walworth, Wisconsin. What prompts a City Year corps to take such actions? There’s only one possible explanation—BTR! But what is BTR? BTR stands for Basic Training Retreat and is an off-site retreat for the City Year Milwaukee AmeriCorps members and staff. The purpose of BTR is to build community, learn City Year culture, better understand the work we do with students and have fun!

The first day (Wednesday) of BTR consisted of an introduction of what to expect for the next three days of programming. This was also the day that physical training (PT) was introduced to the corps in the form of PT Olympics. PT Olympics is where each school team practices and then is scored on each of the PT moves we do. The winner of PT Olympics (shout out to the Pulaski team!) got to eat dinner first — a high honor!

On Thursday we had our second site-wide equity summit where we focused on our identities and how they show up in the world through a social justice lens. This was an extremely important part of BTR because if we (the City Year staff and corps members) don’t know ourselves and aren’t aware of the social justice issues that our work encompasses then we cannot effectively serve students. Thursday was a day of heavy sessions and so we ended the night with a talent show to show off our very talented corps!

The last day of BTR (Friday) we had our first Unity Rally! A Unity Rally is where the whole site gets together and executes all of the PT moves together as a unit. This day was full of spirit, discipline, purpose, and pride! After the Unity Rally we participated in a competitive team building activity and then headed back to Milwaukee.

During BTR we learned important pieces of City Year culture in the form of Unity Rally and PT moves, learned more about our identities and the social justice work that we do at City Year, and spent three days and nights learning more about each other and building team. Until next year Inspiration Ministries!