We are devastated by the news that on June 18, Los Angeles Sheriff’s Deputies shot and killed Andrés Guardado, an 18-year-old son, brother, cousin, friend and beloved former City Year student.

In 2015, City Year had the opportunity to meet and work with Andrés Guardado when he attended Belmont High School. He worked particularly with one of our AmeriCorps members, Imantha. Over the course of the year she and Andrés grew close, as many of our alum can attest happens when you spend so much time working one-on-one. 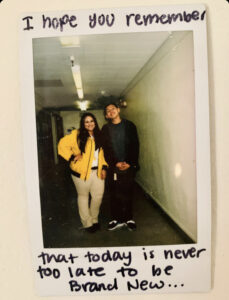 Andrés made us smile and laugh whenever he visited us. Members of the team remember the ear to ear smile he would always wear when he came into the City Year room (whether he was supposed to be there or not). Andrés opened up to Imantha and the rest of the team. He let us be a part of his world and gave us his trust. He ended his Freshman year back on grade level in English, and no one was happier than him to be able to share the news.

However, what matters most is what Andrés chose to do after his year with City Year. Our corps members often wonder, “what will happen after my time with my student this year?” Andrés created his own goals and set expectations for himself. He had two jobs, he went to community college, and he wanted to be a registered nurse. That is what we all hope for and want to hear about our students. Our hearts are broken.

We condemn the repeated police killings of our Black and Brown Americans – this must stop. We join with the voices that are demanding justice for this latest police killing of a young man of color. We stand with members of our community who are personally impacted by this continued violence, including the young people we support in schools across the country who experience the traumatic impacts of racial violence and police brutality.

We would also like to thank our Belmont family and CYLA alumni for remembering Andrés’ legacy and continuing to advocate for him during this time.

Andrés was part of our City Year community, please consider donating to support his family during this time. You can do so here.